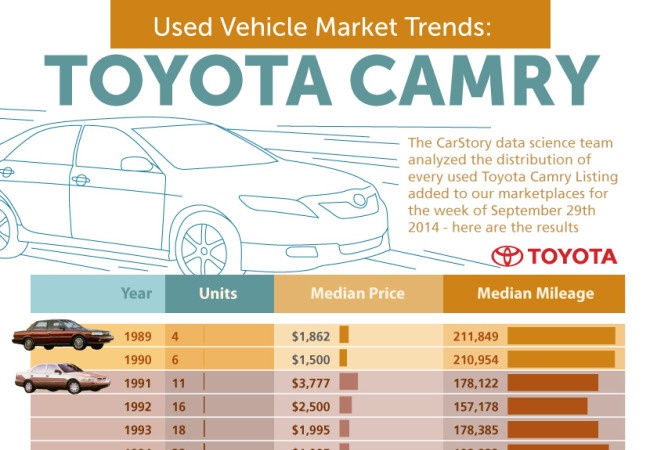 The Toyota Camry is the standard by which used cars are measured. Since its debut in 1979, the Toyota Camry (originally the Celica Camry) has dominated its market on the strength of the Toyota brand, reputation for reliability and affordability. As a worldwide sales leader, it is the model for which Toyota is best known, grabbing around 45 percent of Toyota’s U.S. sales annually.

The Toyota Camry (which dropped the Celica badge by 1982) began initially as a compact. Later versions of the Camry grew to be considered mid-sized vehicles with wider bodies and increased passenger space. Its immediate predecessor was the Toyota Corona. The chief difference between the two models were rear wheel drive (Corona) and front wheel drive (Camry).

Car Sales and The Toyota Camry

Today’s Camry, while far more advanced, has not strayed from the original Camry concept: basic, utilitarian, four-door sedans with little-to-no frills. During its narrow body compact car phase (1982 – 1989), the Camry chief rival was (and largely remains) the nearly-as-ubiquitous Honda Accord. Few trim levels were offered in the early-year models. A Camry was a Camry, in other words.

The 1987 model is considered the start of the second-generation Camry. Aimed at keeping pace with the Accord, the second generation Camry offered increased horsepower and the availability of All-Trac all-wheel drive, in addition to new trim levels.

As the Camry became more popular in America, so did the temptation to enhance its size to continue to whet the American appetite for larger vehicles. The 1992 model debuted with an increase in length, height, width and wheelbase. The Camry has remained a mid-sized vehicle since the 1992 redesign. The Camry followed a redesign pattern of every five years and saw new generation models released in 1997, 2002 and 2007. A new Camry introduced in the 2012 model year continues as the most current generation of the vehicle.

Who Buys the Toyota Camry?

Toyota advertises the new model Camry as a “comfortable car.” “Familiar friend” might be a better descriptor as the Camry will pale in comparison to the comforts offered by more upscale models. The Camry is the quintessential fullback on your football team: If you need a yard, he’ll get you two. If you need three yards, he’ll get you two. The limitations of the Camry are apparent but it has never detracted from its appeal to those who need an affordable, reliable vehicle for small family transportation or economical commuting. Or both, as is often the case.

Camry buyers know that they’re not getting a sexy car that will impress their friends — nor will it incite envy in their enemies. Instead, Camry buyers expect to receive safe, reliable transportation at an attractive price point. This is the basis of the Camry and its longstanding worldwide success. Leveraging Toyota’s reputation for quality, Camrys retain value well — another attractive selling point for Camry buyers.

According to MotorTrend, the historically “family” sedan Camry underwent a significant demographic shift with the revamped 2012 model. The most recent generation Camry performs (some say unexpectedly) better in attracting younger buyers, taking a swipe away from Scion, the brand specifically aimed at younger buyers. Prior to the 2012 re-design, the most common profile of a Camry buyer was a mid-50s Baby Boomer. Today, the average age of a Camry buyer is about 10 years younger, with a lot of attention paid to the sporty SE trim level.

What's the Market For the Toyota Camry?

According to NJ.com, the Toyota Camry is once again the top-selling car model in the U.S. as of March 2014. Having enjoyed top-seller status in the U.S. for most of the past 12 years, the Camry has once again reclaimed the crown from Nissan’s Altima model. Both mid-size kings continue to battle for the lead dog role against a slate of competition that includes new models from Ford, Hyundai and Nissan, and the ever-present Honda Accord.

America’s thirst for mid-size sedans continues, with the used Camry market remaining strong and simultaneously serving as a barometer for the health of used mid-sized vehicles.