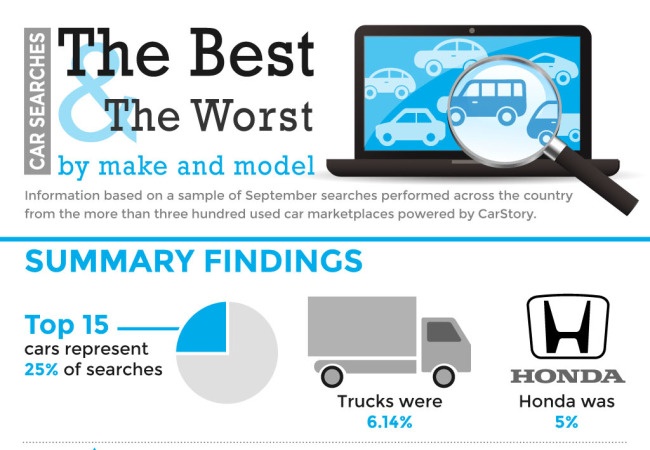 Now that the Summer is over and we're moving into Fall, let's take a look at the used cars that were hot in September. CarStory powers used car searches for many of the largest used car marketplaces on the web. As a leader in automotive big data, each month we see a lot of activity and insights on used cars. Last month we took a sample of the traffic and analyzed millions of used car searches from across the US. The results were very interesting.

Honda also performed well. It had three models in the top 15 searches, combining for 5.01 percent of search volume in total. Its most popular models were the Civic, Accord, and CR-V.

Most Popular Car and Truck Searches

The search data in general showed high stratification. The 15 most-popular models accounted for more than a quarter of car search volume, while the 15 least-popular models generated just 2.06 percent of searches, less than each of the top three most-searched-for vehicles.

There was also greater variety in car search volume among the most popular vehicles. The F-150 accounted for three times as many searches as the Nissan Altima, 15th on the most-popular list. Among the least-popular vehicles, the differences were smaller. The Pontiac G6 notched a measly 1,100 searches and the Dodge Caravan only saw 1,008. The worst four performers were the Dodge Caravan, Dodge Neon, Hyundai Accent, and Audi TT, each of which accounted for just 0.13 percent of search traffic.

Some of the top performers may have benefited from positive press coverage during the week. The Jeep Wrangler’s redesign netted headlines across the Internet in the last week of September. The F-150 generated press in a number of well-known venues, including the Los Angeles Times, MSN Money, Fox News, and ConsumerReports.org, as it received reviews and won contests for hauling and towing. The unveiling of details for the 2015 Ford Mustang may have delivered a bump to its search popularity as well. Of the four least-popular models, only the Audi TT had positive press coverage during the week.

We all know it pays to keep track of auto trends. You can balance your inventory with the individual makes and models in highest demand. At CarStory we are constantly crunching the numbers and analyzing the trends to provide the most relevant information to dealers and consumers alike. One example is CarStory Market Reports. You can quickly and easily deploy these to your website to drive consumer engagement and sales. Best of all they are free.