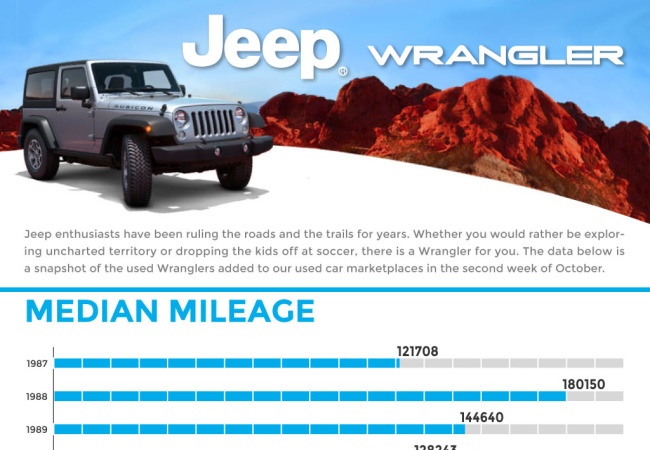 If you think “off roading,” you think “Jeep.” Consumers often use the term “Jeep” to describe the entire category of off-road vehicles and know the Jeep brand without needing to see the letters that spell it — the iconic Jeep grill image will do the trick.

The Jeep Wrangler: The First Reality Show On Wheels

The Jeep Wrangler, the brand’s most ubiquitous model, remains the ideal mid-size (Wrangler Unlimited) and compact SUV for many consumers enamored with the authentic, rugged history the Jeep brand represents. First built for use in 1941 for World War II, many modern SUVs can trace their roots back to the Jeep military vehicle, originally known as the Willys MB and the Jeep CJ (civilian Jeep).

What Is About The Jeep Wrangler?

The Jeep Wrangler, which debuted in 1986 as the replacement for the Jeep CJ, went through a significant revision in 1996 and a complete redesign in 2006. All versions of the Wrangler (like its predecessors) feature separate body/frame construction, rigid live-action front and rear axles and flat windshields. An ongoing feature of Jeep Wranglers is their ability to be driven with or without doors. Despite its longstanding commercial appeal, a military version of the Wrangler (called the CJ8) still is in demand, as well.

Who Is Buying Jeep Wranglers?

The Wrangler buyer is looking for fun and freedom, with a good helping of mud. Wranglers are truly off-road vehicles adapted for the street. Wranglers are not for the luxury SUV set. Jeeps promise and deliver rugged off-road capabilities, with concessions to make them more palatable on paved roads — not the other way around. Consumers looking for a Wrangler can expect open air (less quiet), stiff and rugged suspension and enough torque to get them both into and out of trouble.

The vehicle has matured over the years, for certain. The Wrangler buyer, on the other hand, not so much. Jeep’s enduring appeal remains: adventure, outdoors, tough, reliable … nuthin’ fancy. Compared to the other international off-road king, Land Rover (which first debuted in 1948), Jeep is revered for its single-mindedness over the decades. As a comparison, the most “Jeep-like” offering you can get from Land Rover is the old-school Defender series, which hasn’t been sold in the U.S. for 15 years. The Johnny-come-lately Land Rover has morphed more into luxury SUV territory while the Jeep Wrangler remains the rough-and-tumble, less uppity, more stable-in-tough-spots leader in off-road transportation—at a far more attractive price point.

In other words, you’ll probably want to finish your latte before you get in.

The American Market for Jeep

This late in the calendar year (October) used 2015 units are entering the market. According to the CarStory Data Scientist team, 53 current model year Jeep Wranglers were available in the last week. Other more recent JK models are in much higher supply, with 2011 (475), 2012 (547) and 2013 (495) hitting the market last week.

Compared to more common commuter vehicles, Jeep Wranglers tend to rack up fewer miles. That’s good news for consumers who are targeting Wranglers with less than 100,000 miles. Many models going back as far as 2003 still haven’t hit the 100k mark, according to our data. This offers a wide range of Wrangler options for consumers, including latter-year TJs and the current JKs among Jeep’s trim levels (the X, Sahara, Rubicon and Unlimited) that offer 2-door and 4-door varieties.

Consumers continue to want the Jeep Wrangler, as its above-average resale price translates to lasting value. The median price for the just-back-on-the-market 2015s ($34,447) and 2014s ($34,350) are almost identical, even though the median mileage between the two model years varies by more than 7,000 miles. You have to go back to model year 2012 before the median price drops below $30K.

Every car has a story

Are you a Jeep fanatic? We’d love to hear the story of your off road adventures. Just drop us a comment below.