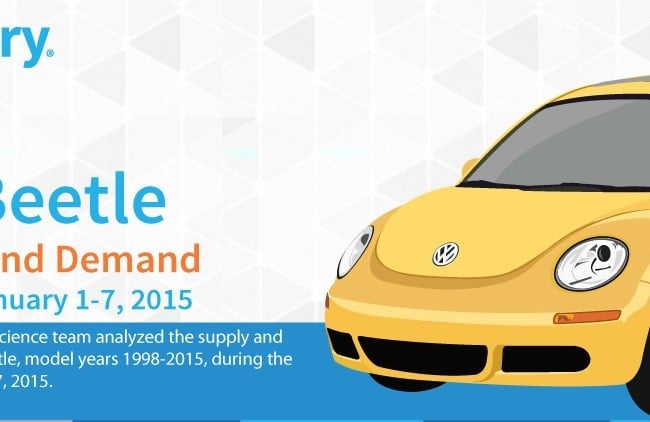 For decades, the auto industry pushed for sleeker, more futuristic cars. By the late 1990s, consumers were tired of designs straight from Star Trek. They wanted something different—something retro.

History of the VW Beetle

Enter the New Beetle. Volkswagen brought the retro ride, which was inspired heavily by the original Beetle, to market at the perfect time. The original Bug had been produced essentially unchanged from 1938 to 1997. Unlike the original, the New Beetle had a front-engine, front-wheel drive layout and all of the modern safety equipment approved here in the states.

Being cute as, well, a bug, has helped the New Beetle keep sound sales numbers over the years. CarStory, whose proprietary database of supply and demand insights is the largest in the automotive industry, has been keeping tabs on Beetle sales trends.

There are basically two generations of the modern VW Beetle; the first generation New Beetle (1998-2010) and the second generation (2012-present), which lost the “new” moniker and is referred to only as Beetle. The Beetle took a one year hiatus in 2011.

In 1998, a bundle of German-engineered cuteness called the new Beetle, rolled onto the streets. Thanks to unique styling and little touches like a flower vase on the dash, the New Beetle was an immediate hit with twenty-somethings and Baby Boomers alike. Aesthetically, the New Beetle carried many design similarities to the original VW Beetle: separate wings, vestigial running boards, sloping headlamps and large round tail lights, and a high rounded roofline. CarStory found 646 of these cars for sale online with an average price of $7,239.50 and 97,124 miles on the odometer. Average demand was 4.57%.

After fourteen years, the New Beetle was no longer retro-chic—it was just dated and stuck, along with the Spice Girls, in the 1990s. In addition to ditching the “new” from its name in 2012, the Beetle underwent a complete transformation inside and out. Based on the mechanical underpinnings from the redesigned VW Golf, the 2012 Beetle was longer, wider, and lower than its predecessor. A total of 317 of these cars were found online with an average price of $20,834.5 and 14,353 on the odometer. Average demand was 10.15%.

Nearly every manufacturer has jumped on the retro bandwagon since the introduction of the New Beetle. While the style is often imitated, there will never be a vehicle as cute—or quirky—as the Beetle.