The Toyota Corolla is the best selling car in the world and in 2013 it reached a milestone of 40 million sold. Don’t let the Corolla’s ordinary appearance fool you – with millions served, it’s the Big Mac of the automotive world.

History of the Toyota Corolla

Toyota has been producing the Corolla since 1966. The compact four-door started out as a rear-wheel drive, but quickly switched to being guided by its front wheels. Over the years, it has been offered with a number of four and six-cylinder engines.

For insight on sales trends of “the best selling car in the world”, we turn to CarStory whose proprietary database of supply and demand insights is the largest in the automotive industry. Instead of going all the way back to the era of Vietnam, the Beatles and miniskirts, CarStory begins their assessment with the 1999 model year Corolla. 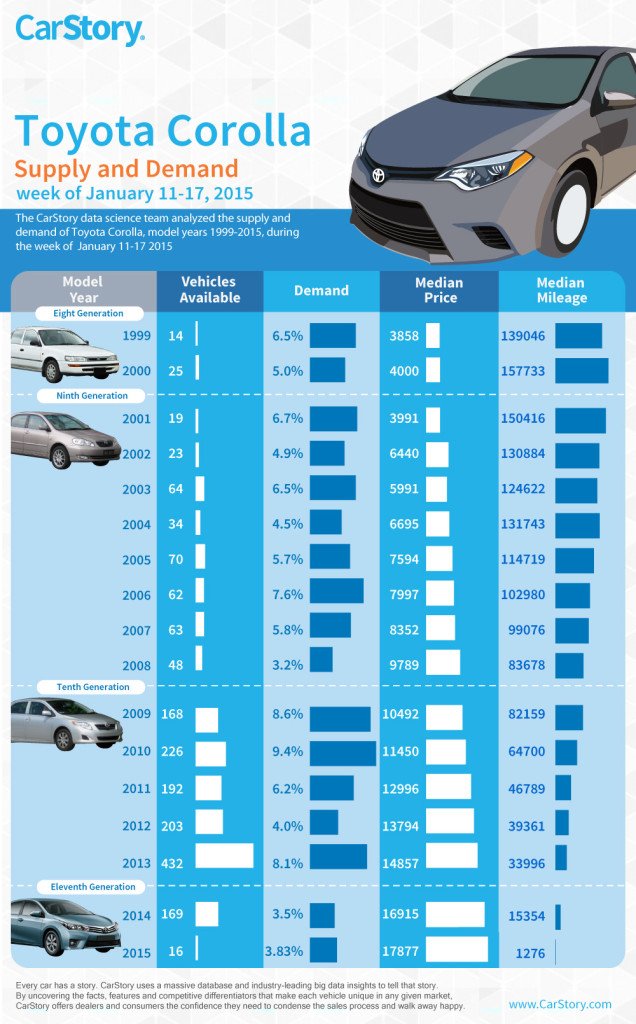 Towards the end of 1999, the Corolla was given a full makeover, including a revamping of its mechanical underpinnings and familiar exterior. A hyper-efficient four-cylinder engine and inoffensive appearance, gained the ninth generation Corolla a legion of followers worldwide.

If you want to stand out from the crowd, buy yourself a yellow Lamborghini. If you’re looking for suburban camouflage, the Corolla is the car for you. CarStory located 422 ninth generation Corollas online with an average price of $6,470.50 and 123,489 miles on the odometer. Average demand was 5.64%.

The Corolla got completely redesigned towards the end of 2008. While the overall demeanor of the Corolla remained unchanged, there were significant mechanical adjustments made, as well as the addition of slightly—and we do mean slightly—more aggressive-looking sheet metal. The Corolla has never been known for being flashy and Toyota decided to stay with the winning formula. There were 1,221 examples of the tenth generation Corolla online with an average price of $12,727 and 53,401 miles on the clock. Average demand was 7.26%.

In order to keep up with the competition, Toyota graced the Corolla with a complete redesign at the end of 2013. The eleventh generation car’s styling borders on assertive, with exaggerated front-end design that sets it apart from previous models. Numerous mechanical tweaks were made as well, but the Corolla’s easy-going personality remains. The Corolla is still the inconspicuous point A to point B commuter consumers have grown to love. A total of 185 eleventh generation cars were found online with an average price of $17,396 and 8,315 miles on the ticker. Average demand comes in at 3.67%.