Physicists must love the Mazda Miata. It has all the ingredients of a mathematically perfect sports car: light weight, rear-wheel drive and a front-mounted engine. This combination gives it a nearly perfect power to weight ratio and provides pure driving bliss.

History of the Mazda Miata

Since its introduction in 1989, the Miata, also known as the MX-5, really hasn’t changed much. Sure, there have been a few mechanical tweaks here and there, but the basic layout has remained unchanged since the pilot episode of the Simpsons aired. The magic comes in the form of a two-seat roadster that’s blast to drive. You’ll see more Miatas at the race track than minivans at a soccer game.

Because of its toss-ability, simplicity and low cost of ownership, the Miata has always been a bestseller. And who better to give us the lowdown on sales figures than CarStory, whose proprietary database of supply and demand insights is the largest in the automotive industry? 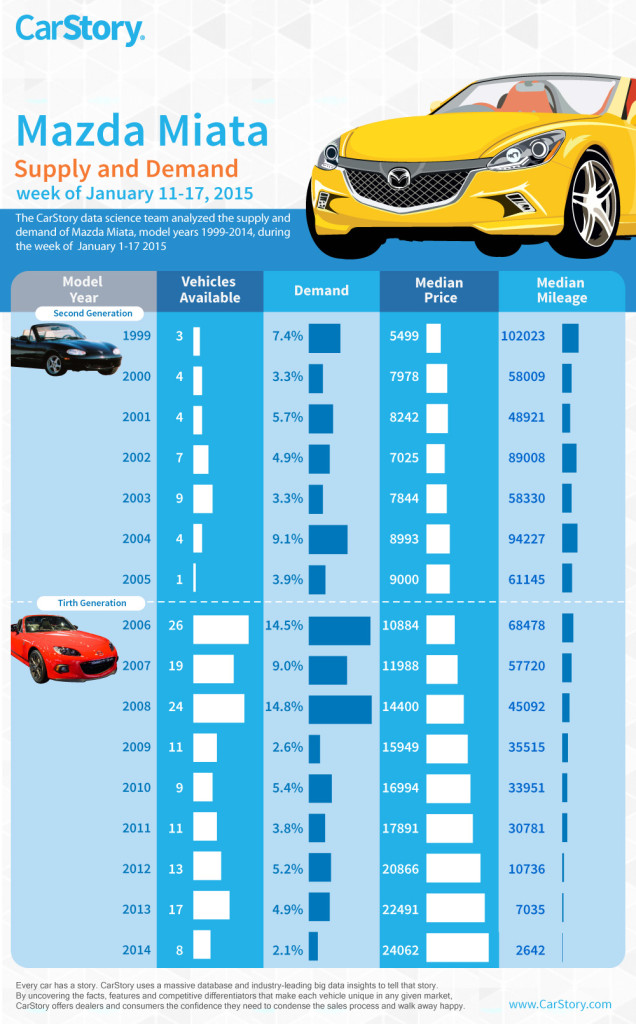 While the Miata dates way back to the dawn of the 1990s, we will start our analysis with the second generation car, which debuted in 1999. This was the first revision to the Miata in over a decade. The first generation Miata had been accused of being too friendly looking, with its definitive bug-eyed grin. So, for the second generation, designers turned that smile upside down in an attempt to make the car appear more aggressive. Several mechanical updates were made as well, in order to back up the bark with a little bite. CarStory located 32 of these cars online with an average price of $7,797.07 and 73,094 miles on the odometer. Average demand was 5.37%.

For 2006, the Miata got its first true top-to-bottom redesign since its launch in 1989. The roadster gained a roomier cockpit to accommodate burgeoning American waistlines, while still tipping the scales at a svelte 2,498 pounds. Under the sheet metal of its adorable front end, the Miata also got an all-new 170-horsepower, 2.0-liter engine. A total of 138 of these beauties were found for sale with an average price of $17,280.5 and 32,438 miles on the clock. Average demand was 6.9%. That’s right; you too can own a piece of sports car heaven for under $20k.

Next year, an all-new Miata will begin showing up at autocross events and track days across the country. For the fourth time in 25 years, the Miata will get a redesign including the engine being moved closer to the roadster's center, improving its sublime weight distribution even further, and a half-inch lower ride height. The new car has been hitting the gym too, to shed some of its cuteness. The revised exterior has a more muscular tone similar to the Mazda 3 or CX-5.

After a quarter of a century, the Mazda Miata is still the computationally perfect sports car. And the numbers don’t lie; it is one of the most fun cars to drive – ever. So, if you want to see a real world application of your high school physics class – the one you thought was worthless – take a Miata for a spin.