The Ford Explorer is found everywhere in America, from country back roads to congested strip mall parking lots. It’s the Toyota Corolla of the SUV segment; cheap, reliable and everyone seems to have one.

History of the Ford Explorer

When the Explorer was first released in 1990, it was a traditional body-on-frame SUV, with a profile as square as a dorm party full of straight-edgers. Over the years, its appearance became more rounded, and its demeanor more car-like. Regardless of the changes that have taken place, the Explorer has always remained a strong seller. For a better idea of what those sales figures look like, we turn to CarStory whose proprietary database of supply and demand insights is the largest in the automotive industry. 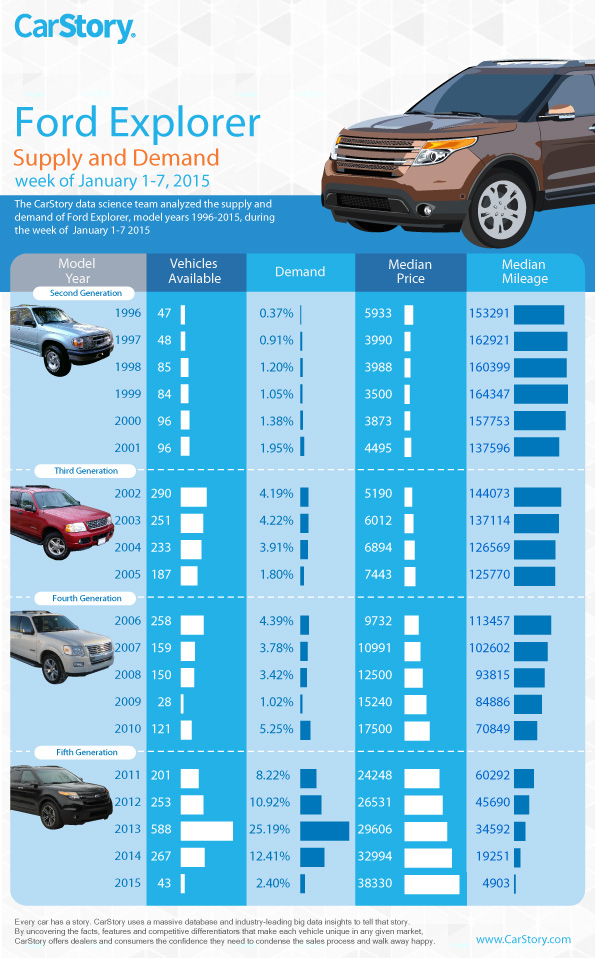 Skipping the first generation Explorer, CarStory begins their analysis with the more curvaceous second generation. Rounded sheet metal was just one of the changes made to the Explorer, which underwent a complete redesign in 1995. Most of the greasy bits were updated as well, the most notable being an car-like front suspension – a big improvement over the first generation’s bone jarring ride. CarStory found a total of 456 of these cars for sale with an average price of $4,371 and 156,050 miles on the odometer. Average demand was 1.14%.

Until the year 2002, the Explorer had shared a great deal of its sheet metal and underpinnings with the Ford Ranger Pickup truck. But for the third generation, the Explorer ditched its blue collar, pick-em-up truck roots in favor of a more polished demeanor, with refinements such as a rear-independent suspension. A total of 961 of these cars were found for sale online with an average price of $6,385 and 133,381 miles on the odometer. Average demand was 4.03%.

Not to be overshadowed by its new sibling, the Ford Freestyle, the fourth generation Ford Explorer grew in size. The growth spurt, in addition to numerous chassis and interior tweaks, earned the 2006 Ford Explorer a North American Truck of the Year nomination. CarStory rounded up 716 examples of the fourth generation Explorer with an average price of $13,192.3 and 93,122 miles on the ticker. Average demand was 17.86%.

The fifth Generation is where things get really interesting. The Explorer, which started life with live axles and a body-on-frame design, began a new chapter as a unibody crossover. The off-road centric rig of the past was replaced by a people-mover, designed primary for the pavement. All of the latest technology for the digital era was onboard as well, including the Ford SYNC vehicle communications system. CarStory located 1,352 of these cars online with a price of $30,342 and 32,946 miles on the dash. Average demand was 11.83%.

The Explorer has come a long way since its humble beginning as a truck-based SUV. Regardless of the alterations, it has always remained one of the bestselling SUVs (or should we say, crossovers) to grace both the city streets and muddy roads of the good ol’ U.S.A.