Before the Dodge Caravan, soccer moms (and dads) had never heard of a minivan. The idea for such a vehicle was first conceived by the legendary Lee Iacocca and produced for the American market by Chrysler. After the introduction of the Dodge Caravan, one thing was clear: family road trips would never be the same again.

History of the Dodge Caravan

The Dodge Caravan and its longer wheelbase variant the Grand Caravan have been cruising through drive-thrus in search of Happy Meals since 1984. The Caravan holds the title of the first minivan ever produced and was a top seller for Chrysler. Looking at similar and later minivans—like the Voyager, Town and Country and Volkswagen Routan—more than 11 million vehicles based on the Caravan platform have been sold worldwide. Who knew a minivan could be an international superstar?

Much to the disappointment of families everywhere, Chrysler announced it would discontinue the Caravan in 2016. Instead of mourning the loss of America’s original minivan, we will celebrate its past by inspecting its sales figures, starting with the 1996 model year. To paint a better picture, we turn to CarStory whose proprietary database of supply and demand insights is the largest in the automotive industry. 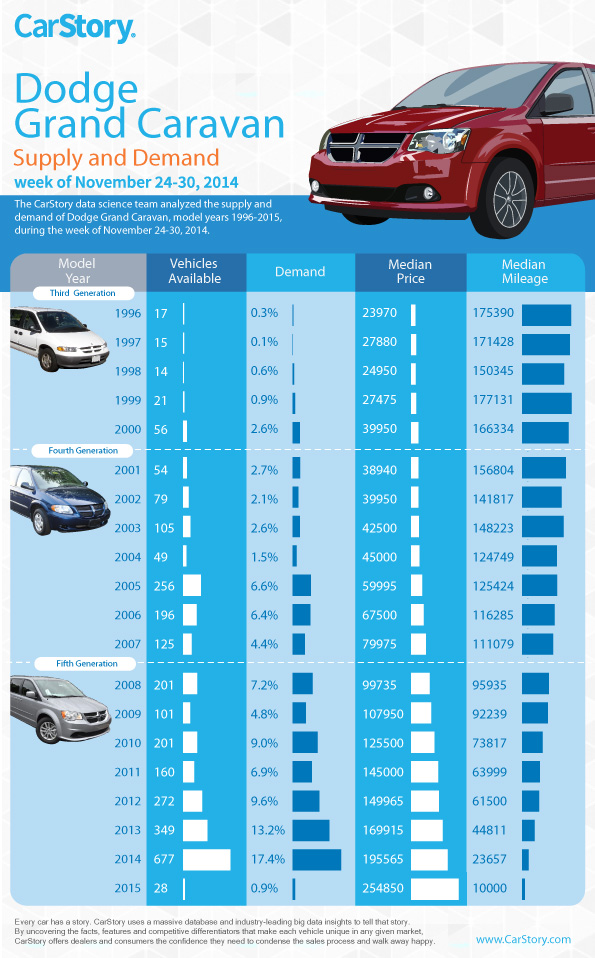 1996 marks the beginning of the modern Caravan. Prior models were boxy units without modern computer controls. The third generation featured a number of innovations, including a driver-side sliding door and revamped powertrain controls. CarStory found 123 of these vehicles available for child hauling duties, with an average price of $2884.5 (a bargain!) and 168,125 well-traveled miles on the odometer. Average demand was .9%

Just when minivan connoisseurs thought things couldn’t get any better, Chrysler introduced the fourth generation Caravan. The new model included a number of improvements, including a larger body frame, modified headlights and taillights, power sliding doors on both sides, a power hatch, and a redesigned 3.8L engine. If you’ve in the market to buy, there are still plenty of these vans; CarStory found 920 examples online. To put one in your garage, expect to pay an average of $4912 with 132,054 miles on the ticker. The average demand for these vans comes in at 3.75%.

The introduction of the fifth generation came with some significant changes to Chrysler’s minivan. The short wheelbase Caravan was gone, leaving only the Grand Caravan to carry on the name. A host of new powertrain options also entered the market. Today there are around 1,989 of these vans for sale online, with an average price of $15,606 and 56,966 miles on the clock. The average demand was 8.625%.

If you look up minivan in the dictionary, you're likely to see a picture of the original Caravan, with its wedge shape and imitation wood panels. Over the last two decades, the Dodge Caravan has evolved and made a name for itself. If you want to own a piece of American history that can transport the entire family, the Caravan is the vehicle for you.