Is It the Season To Buy or Sell Your Car? 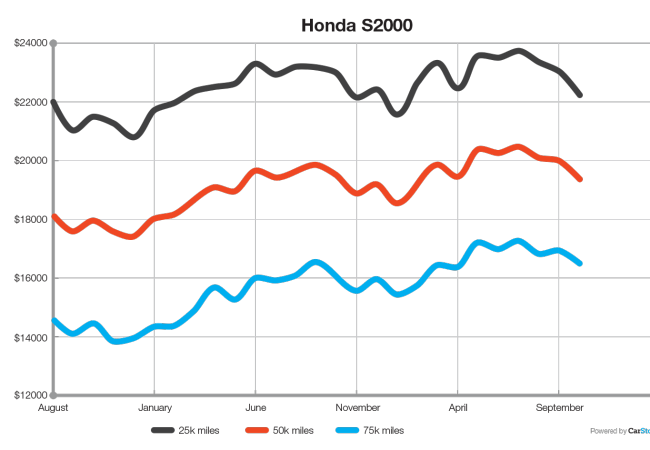 Everything has its season – retail shoppers get crazy around the holidays and gas prices soar during the summer months. The automobile market is no different – there is a definite pattern that governs automotive retail values from season to season.

But determining seasonal trends and backing up the findings with solid facts is no easy feat. In order to accurately predict the best time to buy or sell a car, tremendously large data sets have to be analyzed. The buzz phrase ‘big data’ is all over the internet and in the news nowadays. It’s an all-encompassing term that describes a data set so large that the typical data application struggles to process it.

Is It the Time to Buy or Sell Your Car?

We asked our CarStory Data Scientist to do a little number crunching. They analyzed millions of vehicles in our inventory over a sixteen-month period to determine the pricing trends for the Honda Accord, Mazda Miata and Honda S2000.

Car Sales of Honda Accord, Mazda Miata, and Honda S2000

First off we will take a look at the Accord. Sale prices were the lowest in August and the highest during July. Although the prices varied according to year, there were noticeable seasonal trends. In the beginning of the year, prices were low, and then they would climb steadily – with the exception of the month of May – until reaching a peak during the summer months. By August, prices had begun to drop, decreasing until January when the cycle would start over again. September however, seems to be an outlier in this otherwise linear drop in price between August and January. 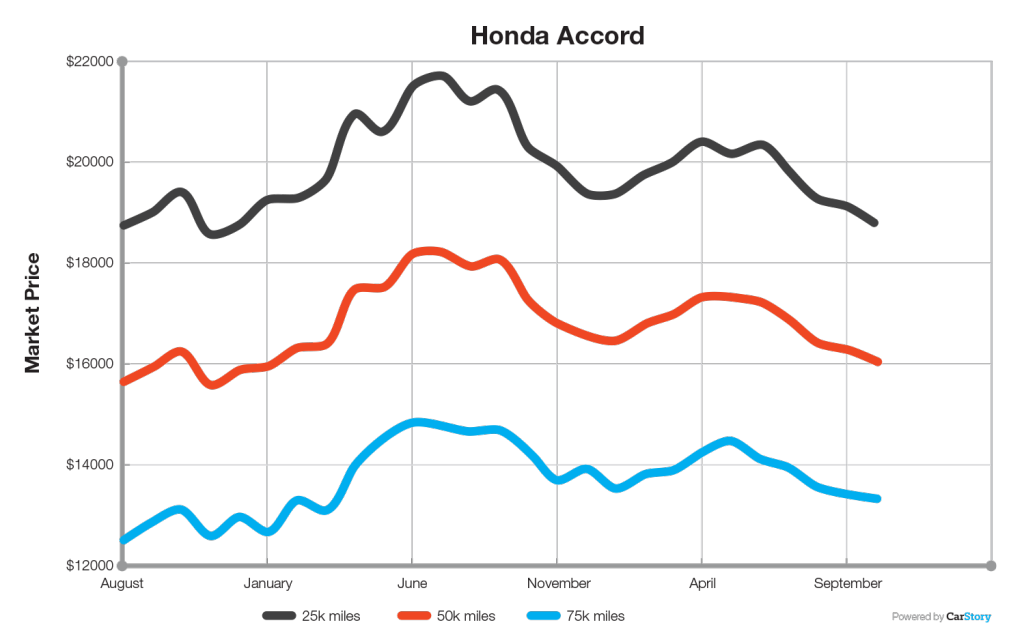 This indicates that if you are in the market for an Accord, you should be headed to the dealership between the months of August and January, while skipping September. The fall and early winter are prime buying months. But, if you’re a seller trying to pawn off a used Accord, it’s best to wait until spring or summer. 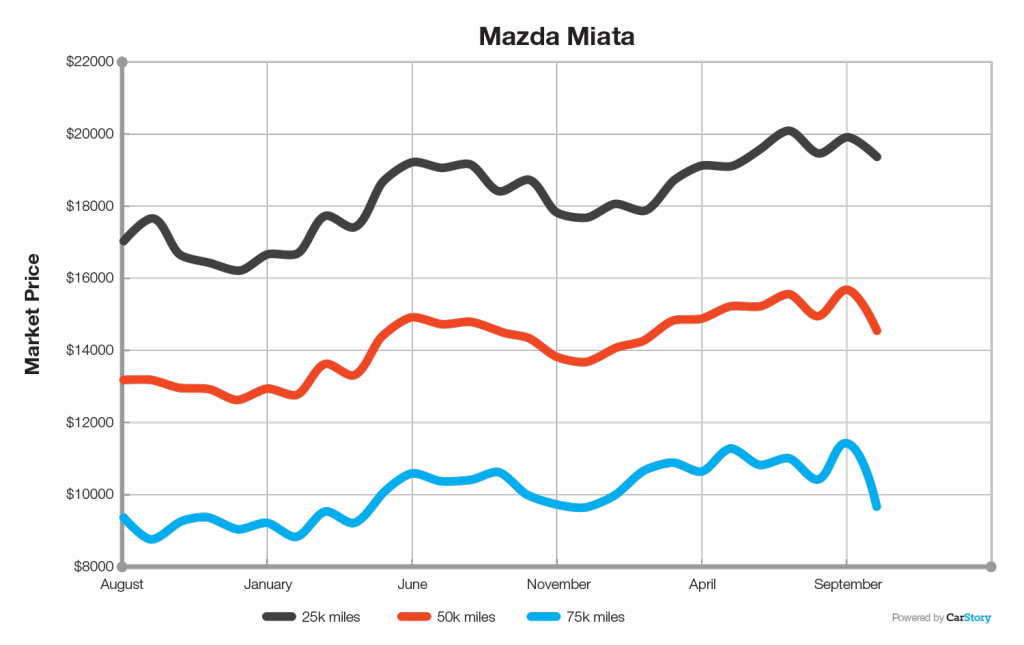 Next, we will take a look at the Miata. The seasonal trends were similar to that of the Accord, but not identical. The lowest price is in December and the highest is July. Miata prices are slightly less linear than Accord prices, which may be attributed to the fact that Miata sales are driven by emotion and impulse, unlike Accords. But the Miata follows the same overall trend as the Accord – prices start out low in the winter months and steadily increase until hitting their peak in the summer. It probably doesn’t come as a surprise that the best time to buy a convertible sports car is in the winter, and conversely, the best time to sell is in the summer. 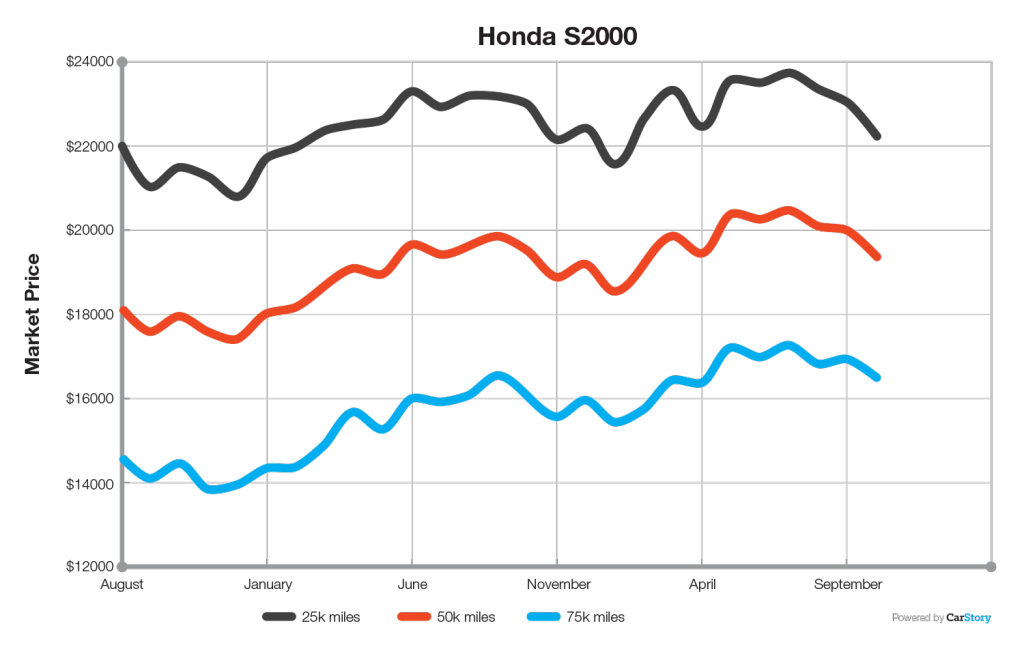 Finally, we will look at the S2000. The lowest price on the graph for Honda’s two-seater is December, and the highest price is July. Winter months – particularly December – seem to be rather gloomy for the little sports car. Sales prices are at their lowest around Christmas time, and then begin their upward climb around January, until reaching their peak in the summer. By late fall, prices are dwindling again. So, the holidays are a good time to pick up an S2000 and park it under the Christmas tree.

If you’re shopping for a convertible, dealers know consumers are pining for top-down driving during the warmer weather. This increased demand drives inventory down and prices up, so it is unlikely you will find a good deal during the summer. When winter rolls around, however, Ragtops are hard to move. If you can wait until spring to drop the top, you can get a sweetheart deal.

What this study demonstrates is how the use of a big data analytics can help you make better purchase decisions. So, next time you hear the term big data don’t just think of the Google and the NSA – think of CarStory. If you would like to put the power of our data science to work for your dealership, check out our newly released CarStory Market Reports. They are absolutely free and are packed with our vehicle insights.