Visit any college campus in America and you will find a sea of Honda Civics crowding the parking lot. Why? Because the Civic is reliable, practical and inexpensive. In other words, it’s the perfect car to give an undergraduate with a lack of responsibility and limited driving experience. But, the civic isn’t just great for young people – it works for anyone who wants a car that’s low-cost and lasts longer than an unopened Twinkie.

The History of the Honda Civic

Before the Civic debuted in 1973, Honda was known more for its motorcycles than for its cars. This all changed when the civic hit the scene, sporting amazing space efficiency, fun driving dynamics and 40 mpg. For the next 41 years, the Civic remained a bestseller by staying true to its original design.

Using data from the top automotive websites, CarStory has crunched the numbers to prove the Civic is as popular as ever. To do this, the company analyzed the sales of 1991 to 2015 model year Civics.

Even though Civics last an eternity, there aren’t many fourth generation (1991-1993) models for sale. Out of the 18 units CarStory found, the average demand was .26%, with a median price of $2167 and a norm of 192,055 miles on the odometer. Typically, the demand for aging, yet not-quite-classic vehicles is rather low. But, in a few years the third generation Civic may have the retro appeal of a 1960s muscle car – ok, maybe not. 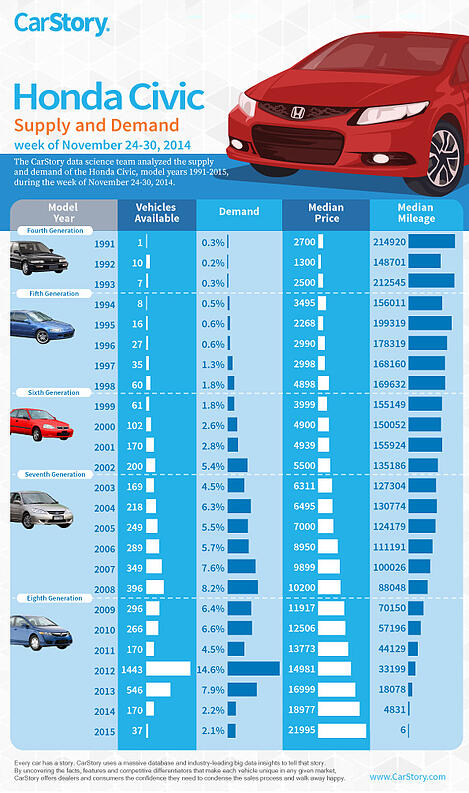 The fifth generation Civic (1994-1998) got more aerodynamic styling which led to the familiar “jellybean” look the car is known for. Of the 146 Civics surveyed, CarStory found an average demand of .96%, at $3,330 with 174,288 miles on the clock. Despite their age, these cars just won’t die, which is why there are still so many of them on the market.

The Civic returned for the sixth generation (1999-2002) with relatively unchanged styling. CarStory found 533 examples of this econo-car for sale, with an average demand of 3.15%, cost of $4,835 and149, 078 miles on the ticker. These figures are a testament to the Civic’s outstanding resale value, considering the average MSRP was $16,000 when new.

Finally, the eight generation civic (2009-2015) was introduced. It was an instant success, and quickly found its way into the driveways of thrifty consumers everywhere. CarStory found 2,928 of these cars on the selling block. The average demand of those surveyed was 6.3%, with a cost of $15, 878 and an odometer reading of 32,513 miles. Not surprisingly, newer, low mileage cars have a greater demand and higher cost.

Like WD-40 or OxiClean, the Civic is a timeless formula that actually works. It’s simple, inexpensive and effective. What more could you ask of a compact car? Until Honda starts rolling out in-dash expresso machines, the answer is nada.